Here is our most complicated costume yet!  It’s not too difficult to construct (the tail can be a little tricky), but there are quite a few components… 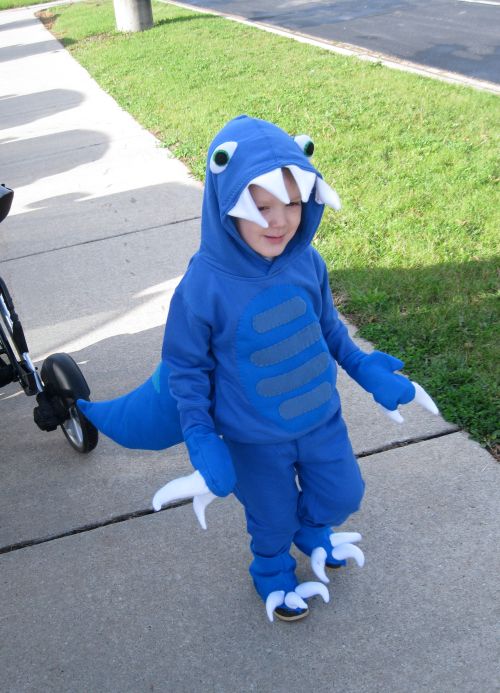 We’ll start with a hooded sweatshirt and add to those:

Read on for tips and instructions!

I want to clarify that the pattern for these eyes was made by me with my very own skull meat and was definitely a trial and error.  If you know of a different way that you love to use, please mention it in the comments!

What we’re going for here is a 3 dimensional eye shape with a base that can be hand sewn on to the top of a costume hood or hat.

On we go… First step is to make a pattern.  I do this by drawing half an eye shape on the edge of a folded piece of paper.  Cut out the shape with a seam allowance. 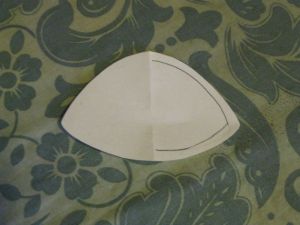 You could add your eye detail (pupil/iris) to the white piece now, or you can hand sew the details on later.  I choose to sew them on later.

Sew the eyes together, right sides together, but leave a little space above the bottom edges. 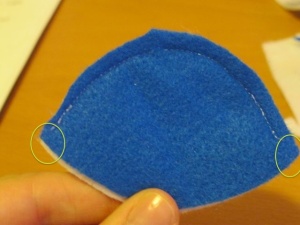 Now to make the base return to your pattern piece.  Fold the pattern from point-to-point.  Line the crease up on the folded edge of a piece of paper and cut out the shape of the small arch.   This is the pattern piece for the base of your eye. 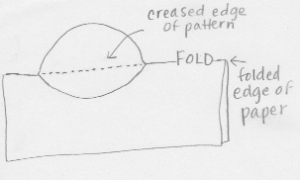 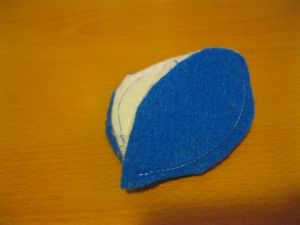 Flip the eye unit to the other side, aligning the other edge of the unit to the base.  Sew the points and a little bit of the arch, leaving a gap in the arch unsewn so the unit can be flipped inside-out.

Note the gap in sewing signified by the green oval

Turn the unit inside-out and fill with Poly-Fil.  Hand-stitch the gap closed and attach to the hood using your best blind-stitch.

Add the eye detail (I hand-sewed some felt circles on) and you’re done!

The tail is the trickiest part of this costume.   I wanted the tail to be removable because otherwise my kiddo couldn’t wear the costume in the car.  Also, it can be a bit cumbersome to walk around with the tail, so I wanted to be able to offer him a break from being a big-long-tail-wearer.   So there is a great deal of “fake-it-until-you-make-it” when it comes to your methodology for attaching the tail to the hoodie and also for constructing the base of the tail… I’ll explain as best as I can as we go.

We’re going to contsruct a three-dimensional tail with two sides, a bottom, and a base to attach the tail to the sweatshirt.

From felt or a light-weight fleece, cut two tail shapes.

Then measure the bottom arch of the tail shape…

and use that measurement to cut this shape…. 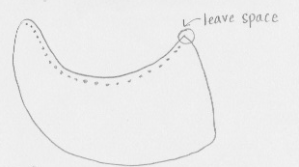 With right sides together, sew the two tail pieces together across the top only.

Still right sides together, sew the base strip to the two tail pieces.

Okay here’s a big “fake it till you make it” part… to make the pattern for your base, puff up your tail unit and lay it open end-down onto your fabric.  Trace a sshape that’s sort of like a triangle with curved sides, but a straight bottom.  Cut it out!  Sorry dudes – this isn’t “how to be perfect,” it’s “how to be Jenna.”

Sew the base to the tail unit one side at a time. Do not sew the tail to the long-stripped base unit as we need that gap to turn this sucker inside out. If you feel like you're going to want to use buttons to attach the base to the sweatshirt, trap some elastic loops inside the unit so that when you flip it right-side-out, you'll have two little hoops to attach to buttons.

Turn your unit right-side-out, stuff with Poly-fil, and hand-stitch the gap closed.   Now it’s time to figure out how you want to attach the tail to the sweatshirt.  I chose a combination of Velcro, snaps, and buttons.  I hand sewed the snaps and buttons into their respective places, and just placed some sticky Velcro onto the base of the tail, knowing it would stick to the felt in the costume. 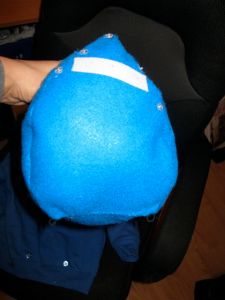 Snaps, Button Loops, and Velcro! The button loops are in the two bottom corners.

Yay!  You did the tail!  That was the hardest part! 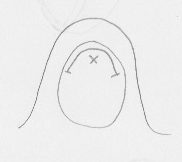 Measure the hoodie where you will want the teeth.

Cut out a strip of teeth from two layers of fabric. Sew them all together (right sides together) except a gap where you will turn the unit inside out.

Sew the teeth to the inside of the hoodie and attach using a strong zig-zag stitch.

I went with an oval shape with some curved-ended bars.  This is highly accurate according to the various Dinosaur Train figures I have laying around the house.

The cheap felt I used is already pilling because my dinosaur wears his costume everyday : )

Really I guess they’re diamonds rather than stripes… Cut them out of felt and hand-sew them to your desired location.

Four from the hood down the back of the sweatshirt...

Trace the costume-wearers hands and make a mitten pattern. Add 1 inch to the length of the mitten.

Right sides together, sew a mitten unit from two layers of fabic from the cuff to the thumb crease.

Cut some elastic about 1 1/4 inch longer than your costume wearer's wrist measurement and slide it into the tube you created by folding the cuff up. I find it helps to sew one end into place, and then have a safety pin attached the other end to ease it sliding through the tube. Once it comes out the other end, baste stitch it into place. Then sew the rest of the mitten unit together from thumb crease, over the elastic, to the cuff.

Head on over to Made by Rae to get the awesome formula for your spats.  Cut out two layers of fabric for each boot.

For each piece fold over the raw edges to the bad side of the fabric and top stitch. 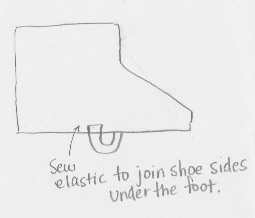 This is to keep the spat on the shoe as the costume-wearer stomps around.

Okay only one more step to go!  Making the claws!  If your kid is a stickler for accuracy and wants to be a true T-Rex, he or she will need two claws for each mitten and three for each spat.

I make the claws almost exactly the same as I make the eye units.  If any of this seems unclear, perhaps referring to the eye section or yelling at me in the comments section will help. 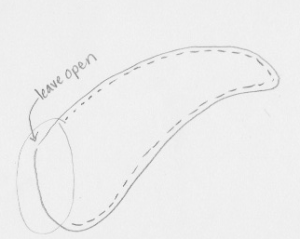 Cut out some claw-like shapes out of white fabric with a curved base. Sew them together, right sides together.

Make a base-unit pattern by folding your claw pattern right before you reach the curved bottom part. 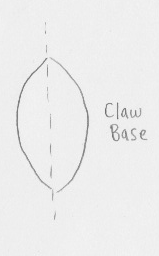 Lining up the fold from your claw pattern, trace the bottom cuve onto the folded edge of a piece of fabric and cut out a base unit. 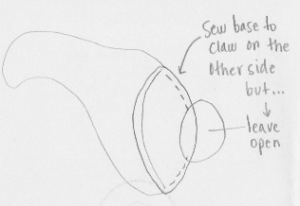 Flip your claw right-side out through the gap, stuff with Poly-fil and then hand-stitch the gap closed, tucking in the seam allowance.  Hand-stitch to your mittens and claws!

OMG LOLZ You did it!  Pat yourself on the back and pray to the costume gods that your kid will still want to be this by the time Halloween rolls around.